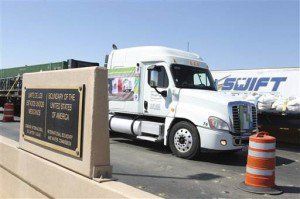 After years of going back and forth, a cross-border trucking program will soon be in effect. This will open up the border to expand trades between Texas and Mexico. The U.S. – Mexico cross-border trucking program will allow Mexican trucking companies to apply for permission to travel with their U.S. bound goods beyond the 20 to 25 mile limit past the border. Right now, U.S. bound goods are warehoused once they reach the border and then reloaded by American carriers for their final destination.

The North American Free Trade Agreement recently did a pilot program that proved to be unpopular by most truck drivers. Trade and union groups in the U.S. did not compile enough reliable data and believe that American drivers could be at risk as a result.

The program has been in limbo for over two decades because of several bitter exchanges between U.S. and Mexican officials. The program that was designed to make international trade more efficient was initiated in 2007 by former President George W. Bush was defunded two years later.

Once the second pilot program was completed in October, the FMCSA confirmed that Mexican carriers are now on track to enroll in the program if they meet various safety and training standards. This program could add to a booming trade relationship between Texas and Mexico.

Mexico is Texas’ largest trading partner and the country’s third, right behind Canada and China. In 2014, the Laredo and El Paso customs districts were the busiest ports on the border, with $269 billion and $86.4 billion in two-way trade.

Shannon O’Neil, a senior fellow for Latin America studies at the Council of Foreign Relations said she didn’t anticipate the majority of Mexican trucking companies would apply for the program immediately because of the current system, which has been used for decades. This new program will also only apply to companies that can afford upgrades to their fleet. Carriers will also need to pass pre-authorized audits, which include drug and alcohol testing, English proficiency and vehicle inspections.

Because of the relatively small pilot program, union groups feel like they left out vital information. Fred McLuckie, the director of the International Brotherhood of Teamsters Department of Federal Legislation and Regulation said the FMCSA report only included data from truck drivers who traveled inside the current limits.

Through December 2013, only 14 Mexico-based carriers with operating capabilities were in the program. According to the report, only five of the carriers only had a provisional operating authority. And trucks from only two Mexican companies were used for the majority of the crossings.

McLuckie stated “the DOT said that they had these other groups of carriers, enterprise carriers and certified carriers whose data they were using to ‘complement the data’ that the obtained with the small number of carriers. That’s not statutorily permitted under the laws governing a pilot program.”

According to the report, the 14 carriers have used about 45 trucks to make nearly 10,000 border crossings since October 2011. On average about 14,000 trucks cross the border from Mexico each day.

McLuckie said that he isn’t opposed to Mexican truck drivers more in the U.S., but with the incomplete data, American drivers will be on roadways with drivers who do not meet safety standards. Because of this, the safety of drivers in America would be in jeopardy.

To learn more about what Progressive Reporting can do for you, including safety audit upgrades, reinstatement, IFTA filing and much more, visit us at ProgressiveReporting.com or call us at 866-736-6507.